Jeff Leeper assists paranormal group in desecration of human remains and grave sites in Texas. Jeff Leeper “I prayed over there bones”

Just say it is not so and I would like to believe that this did not happen, none the less, it apparently has. With multiple sources coming forward and the individuals own posts not once, but many times thus far. They all explained over social media, how they found human remains and one was even of said to have ran around holding the bones. That being Chris Anderson. One such post claimed, that A new name for the one participant, was now “The Bone Collector”.

How about “JAIL BIRD”, sounds better.

Jeff Leeper had this to say about his prior Texas adventure, when asked in chat..

“i’m just volunteering my time and work to help a cemetery. I cant find fault with someone else willing to help. I don’t have money, so all I can give is my time and efforts.

“Yeah. Thank you. I’m trying to help…lol.. but Im poor folks so all I have to help with is back work.

Paranormal Herald: “Was curious your recent event where was it did you really find bones there, was it during day time or night. Kind of creepy lol

Paranormal Herald”What made you chose that particular cemetery ?

Jeff Leeper:”It’s been a cause there. I just found out about it. You know me. Lol. A big sap for causes.

Paranormal Herald”Yah was lorie Johnson with you? so Lorie Johnson approved of the handling of human remains then?

Jeff Leeper:”She drove down with a friend. It’s amazing how a cemetery that buries babies for free can grab a heart.

Paranormal Herald: “What seems absolutely amazing to me, is how at least 4 people. With out permission, licenses or permits would fly to Texas Old Brown cemetery, carry human remains away or around but, considers themselves to have done a great deed? In most cases Texas law states it to be a serious crime to even handle or mess with any sort of human remains. Let alone being on the said property and my guess was after hours even?

According to A post on social media, the removal of said bones happened more then once? care to explain this sir? 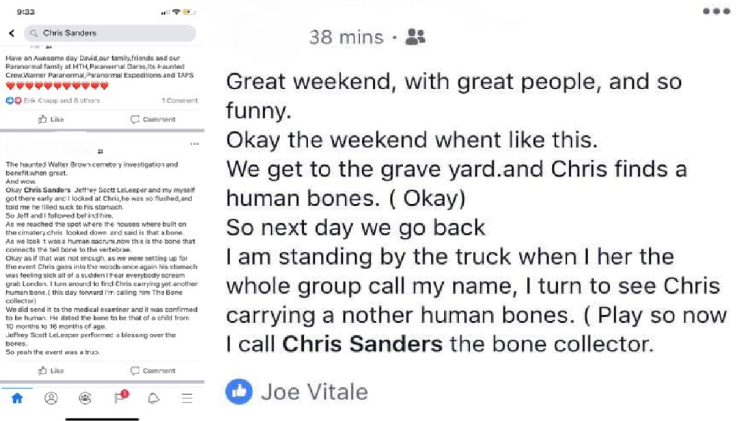 Chris Sanders is with Jeffrey Scott Leeper.
January 14 at 3:06 PM ·

It was not totally clear, what they were doing in this Texas old cemetery. Or if they had permission to, as one poster stated, run around with human bones. What ever the case, there was no doubt they were all taking part in what ever it was,that went on that day.

According to Texas law.

The Texas Historical Commission or other state agencies do not enforce cemetery laws. This responsibility belongs to county and municipal law enforcement agencies. If you are aware of cemetery vandalism or desecration, contact your county sheriff or local police department.
Protection of historic cemeteries is, however, a shared responsibility. Notification must be made in order to protect these irreplaceable cultural resources. Cemetery desecration is a continuing problem in Texas and throughout the United States. Destruction occurs in many ways, including the illegal removal of human remains, damage from roaming livestock, encroaching development and construction, vandalism, and theft of grave goods and funerary objects.
If you believe that items offered for sale are former cemetery properties, contact local law enforcement authorities. State laws exist to protect cemeteries from vandalism, theft, and desecration.

Any person who wishes to visit a cemetery that has no public ingress or egress shall have the rights for visitation during reasonable hours and for purposes associated with cemetery visits. The owner of the lands surrounding the cemetery may designate the routes for reasonable access. Interference with ingress and egress is a Class C misdemeanor. (Health and Safety Code, Section 711.041 and Section 711.0521)

The same old names have popped up a few times concerning the paranormal. Lorie Johnson, self claimed psychic and wannabe star of Sheperdstown. Chris Sanders, wannabe southern paranormal star, as well as others not even worth mentioning.

As the story goes, they all boarded a plane and flew to a graveyard cemetery, somewhere in Texas. According to an inside source, they were filming for both charity and for some trailer for some reality show, that truly has not even been invented yet.

According to one mans post, he ran around the cemetery with said human remains. and stated he had A great time doing so. The names of the individual have been crossed out for fear of any said retaliation of this reporting of said story.

The story no matter how it is perceived to be, sends us all a clear message, be on the awareness of certified individuals in there own paranormal craziness.

MY NAME IS EVAN JENSEN A PARANORMAL EXPERT IF THERE IS SUCH A THING. I myself being involved at various aspects of the paranormal have come to realize it is a field riddled with conmen and frauds hoping to evade the public and con as many as possible. This paper I.E blog site has stopped many from doing such. It is a free site for those needing help and wishing to spread the news of there fellow con people.
View all posts by BEYOND THE EDGE OF REALITY »
« Don’t poke the Bear, you might not like the truth.
Barby Doll not ready to be infested with psychic demons. Psychic charged for grand larceny »