In A prior article, we wrote about alleged allegations being made against the Gettysburg bash and there owners Pam and Steve. As more information has been made available to us and people have been coming forward, so has the apparent death threats and other associated threats, such as “I will end you” end quote.

Russel, is the apparent owner of the lookout house. I have no idea what is relationship with Pam and Steve Barry are, but I bet they all share something in common, or those types of threats would not  exists. But when bullying such as this occurs, we will be printing it so people will have an awareness of problematic situations.

One more thing the attorney general has been made aware that potential witnesses are being threatened, as well as the Pa police.

It also protects the person being threatened. It is A sort of public record one can find if need be.

One woman posted, that She had been scammed out of some T-shirt deal and that she had a perspective case pending. So others are coming forward with stories and even personal insights into what they them selves say they, have seen.

With acts of threats or retaliation of such threats, most of our sources asked to remain anonymous for there own protection. After seeing such threats made, we simply had to agree. No body has the right to make such threats and quite frankly, one would wonder why? they are being made in the first place.. I mean if the said allegations are not truthful, or if someone is giving false info, then why the death threats in the first place.

The following was stated as I chatted directly with M.R Todd.

“THEY CARED MORE ABOUT THE VENUE, THEIR EVENT” THEN ACTUALLY HELPING PEOPLE. AFTER THAT,WE STAYED AWAY FROM GHETTYSBURG

One man has decided to come forward and stated, it is perfectly fine with him to share his story in specific regards to Pam and Steve. We found him to be honest and sincere in what he had openly told us. He even stated, they had a falling out ,was honest and seemed to me to be quite truthful.

Dan Todd:”Ok we used to stay over there house when they first opened the store after the first Gettysburg bash Steve started talking about buying a bus, then he bought the limo to paranormal tours. they started out poor and all of a sudden were rich and buying all these cars and such.

Paranormal Herald: How is Steve buying this stuff, if he is on disability?

Their investigations, we were told were done by “making friends” with the building owners or employees, but they would actually have to pay for the location for the night. They got the house after we had our fallout. They were talking about buying another house and renting the one in aspers idk if that happened. It seemed like all their attitudes changed after for the first bash. When we had our fallout last year at the bash,it is when it went really south. My wife was directing traffic and a vendor was giving her a hard time about going through the setup area. There was no room for him to get through due to the stage so her and the other 2 people with her directed him to go the other way. The guy comes up to me screaming at me looking for Steve to complain about it. Once we found him he was screaming at Steve about it and threatened to do harm to my wife. At the point I got in the guys face and told him he touches her or attempts too he’s gonna have a problem with me. After that I left to go outside and cool off and Steve came out and got in my face over it so tempers flared and I left for a while to cool off when I came back in was in a demonology lecture, where at least 5 people knew where I

was. Steve was looking for me but before he found me, he went up to everybody involved and made apologies to them except us. He went to my wife and taking her alone and basically said sorry but blamed the whole incident on us. I found my wife outside crying and being consoled by 3 other friends. Well at that point i was even more pissed off not he made my cry and that’s a no no in my book. Fast forwarding i left again cooled off and was talking to a vendor about getting a date for an investigation when Steve comes up to me pissed off demanding  i speak to him. I told him when i was done i would and he basically told me if I didn’t he was throwing me out. I walked away and went behind a friends table because Steve tried to corner me with another guy basically trying to intimidate me. I’m not a guy that’s scares easily.

Basically during our war of words things were said that I don’t want to really say over Facebook but it wasn’t good. At that point we left and didn’t return. I got a message from Pam about all this which i will screen shot. Their interests changed a whole lot they became more about the “THEIR VENUE, THEIR EVENT” then actually helping people. After that we haven’t been back to Gettysburg since then.

When we met them they would talk shit a ban out other people in the town that we both knew from going there and doing investigations trying to smear their names in the mud to make themselves look good and we were stupid enough to go along with it. They made enemies with their son in law last I heard. I don’t know much about the lookout house but it wouldn’t surprise me, if they were pocketing money that were making from the store and all their side businesses as well as the Wounded Warrior funding, or any other charitable group, they may have worked with. 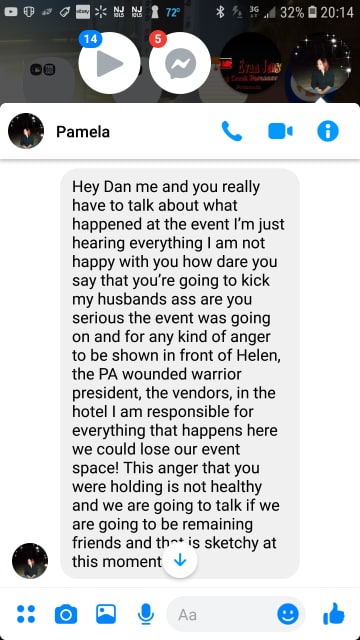 As this saga seems to continue, so will any other pertinent information as it is received. Despite recent threats and constant attacks from either the people named or there friends or business associates all info coming to this paper will be shared unless asked not to by the said individuals willing to state such.

Disclaimer:
This website is offered to you, the user (“User”), conditioned upon your acceptance of the terms, conditions, and notices contained herein, without modification. User access to and use of this website constitutes acceptance of these terms and conditions.
In preparation of this website, including without limitation every page accessible throughout, every effort has been made to offer the most current, accurate, and clearly expressed information possible. Nevertheless, inadvertent errors in information may occur. In particular but without limiting anything here, written expressed or third party generated.
The Paranormal Herald: Makes no warranties or representations whatsoever regarding the quality, content, completeness, suitability, adequacy, sequence, accuracy, or timeliness of such information and data. The data changes rapidly and The Herald can not be held accountable, for information, that is reported then and in now.
Disclaimer continued:
If misleading, inaccurate or otherwise inappropriate information is brought to our attention, a reasonable effort will be made to fix or remove it.
User agrees to (as available) send and receive electronic mail, engage in conferences and chats, download and upload files, and otherwise use this website only as permitted by these terms and conditions, any additional policies or procedures published in this website from time to time
Disclaimer closing:
This Agreement constitutes the entire agreement between the User and Paranormal Herald with respect to this website and it supersedes all prior or contemporaneous communications and proposals, whether electronic, oral or written, between the User and us.

MY NAME IS EVAN JENSEN A PARANORMAL EXPERT IF THERE IS SUCH A THING. I myself being involved at various aspects of the paranormal have come to realize it is a field riddled with conmen and frauds hoping to evade the public and con as many as possible. This paper I.E blog site has stopped many from doing such. It is a free site for those needing help and wishing to spread the news of there fellow con people.
View all posts by BEYOND THE EDGE OF REALITY »
« Pam and Steve Barry owners of Gettysburg Bash, under investigation for fraud and miss usage of charitable funds.
More continued harassment, as Barry Ghost bash case opens even further. »