There have to be moments when you glimpse something decent, something life-affirming even in the most twisted character. That’s where the real art lies. See, I always suspect characters who are painted as lovely, decent human beings. I would always question where the darkness lies.This is where the decency takes a back seat to what most people, will call A harsh and bitter reality. It is the said reality of evil versus good, con-man versus good shepherd.

In this apparent case, it is one child predator versus one alleged autistic 6 year old child. A child that is exploited through pure evil to promote, sell and or help delusional people as Anthony Quinetta into believing his story is even real. To many times in this mans own said chat and YouTube video conversations, he (Anthony)continues his exploitation of the boy, by promoting his said book.’

Some major other concerns are that he Anthony has shown pictures of the  boy and even mentions him by name on his blog..what ever happened to protecting the young child?This is what makes this man a child predator.

It is the continued exploitation by this uneducated Anthony Quinetta, playing god with A boy that is stated as being autistic. This is the tragedy that has went down, while the mainstream media,has done nothing to exploit the man. People need to ask themselves what does it take to protect our children? In this case a very delusional man, either thinks he is the next messiah, or is fooling everyone into thinking he is one. I mean can you imagine he released four not one, but four spirits or said demons from his haunted doll that spoke through an autistic 6 year old child? This is where the law should come in. If it isn’t criminal to influence a young boy by telling him a doll is speaking through him by pictures the boy drew. It sincerely should be. It’s just bloody awful.

If what researchers are saying is correct

“Some researchers have found differences between the autistic brain and the typical brain. Autistic individuals seem to have larger brains. They also seem to process information differently. In other words, their brains are “wired” differently.

Then what sort of damage can some so called psychic do to a 6 year old boy, whom he tells is being inflicted by demonic spirits and said so called attacks? The damage being caused can not be changed, and can or could even revert to even deeper autism. 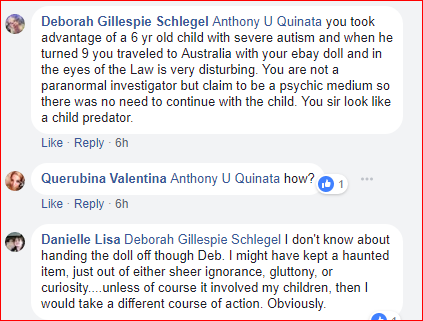 The Internet is a vast source of information for all of us, and naturally some people use that information for good, and some for ill, like grooming and stalking children. So what things can you as a parent, teacher, or other concerned adult do to protect kids against online predators and solicitation? the answer is easy. Shield them from people like this Psychic Anthony Quinetta.

In an earlier article, we wrote about this psychic Anthony quinetta.

What can be more deceptive then the devil? perhaps the devils offspring can? People have been led to deceptive self centered manipulative ways since the making of man kind. Their evil ways and the ways they all to often effect others is a virtual reality of the good versus evil, that exists in modern day life. This story is no different.

exploitation seems to be true key, when some of these online predators wrap there greedy hands with some innocent victim. In this case it was A very young boy named Vincent. Vincent is Autistic, and was then merely 6years old.

In the case of one alleged psychic,(Anthony Quinetta) A book and it’s contents that do include what is being called An autistic child. We have to wonder, just whom is sick and twisted. The entire story from beginning to end is simply ridiculous. The story needs to be investigated. Think of it, a mother with child endorsing some so called psychic to elaborate about demons with her said  autistic child is nothing short of mentally ill her self.

In Anthony’s own blog, he writes “The terrifying, true story, of a young child’s encounter with the Prince of Hell”. This being that autistic child.

Harold the haunted doll has 4 souls that were trapped in it? So Anthony leaves for Australia? again absolutely ridiculous. The man takes his doll on an airplane? wouldn’t that be dangerous to many innocent people then?

Has no problem exploiting an autistic child.

“Being a parent the one thing you always want to do is keep your child safe from any harm. If that was my child that was drawing demonic photos I would be scared and contacting the church or a demonologist for help. Not some so called psychic. Knowing that the child is autistic and this untrained pile of crap psychic is discussing demons with him, is a sure danger to this child’s development. Anthony is nothing less of a predator of the worst kind.

Below are many screenshot conversations held by Anthony Quinetta and others, they show exactly what Anthony says when confronted about a well concocted flop of A story. 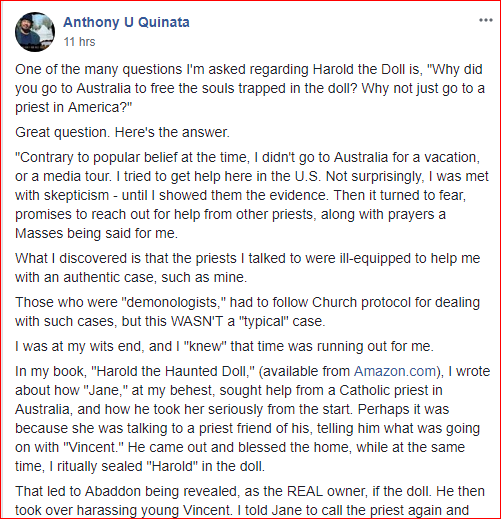 Admits he involved the child even goes further to explain. Keeps saying read my book, is strong on using the boy, as A back drop to promote his book. 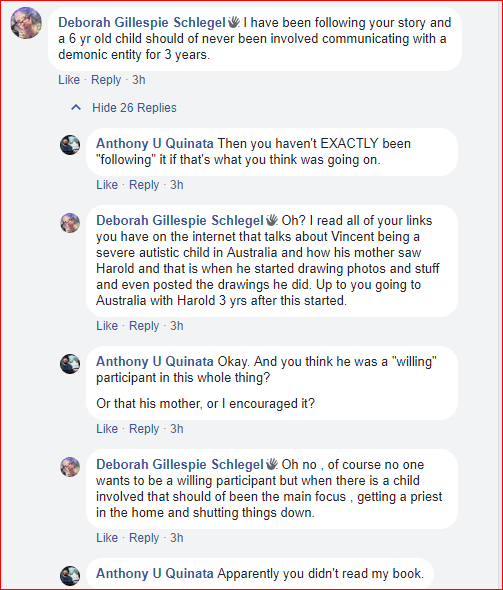 Here you can see how Anthony now exposed, holds to his said lies and responds negatively back to Deborah. Anthony calls others Ignorant. isn’t using an alleged child, who is autistic just plain ignorant? if not, it should be criminal. 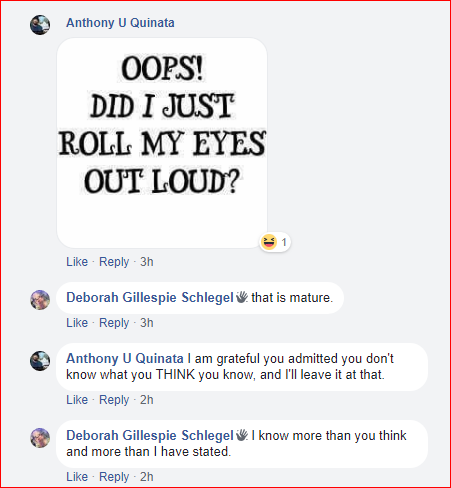 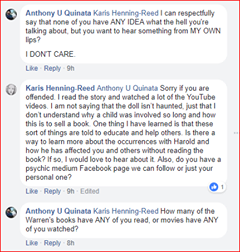 In special summation to the below response. “I think not”. The only eyes being rolled are those who are reading this article.

As I got involved into the paranormal entertainment world, I realized, that there were scammers just waiting to scam people from innocent unsuspecting people. This sickened my stomach, so I began writing about them to expose them so others would not be cheated and so The paranormal Herald came to force.
View all posts by Paranormal Herald Magazine »
« Ryan Buell back on the drug sauce say’s Paranormal fans.
Ghosthunters Of The Heartland stirring up more then ghosts. Charges clients, then disappears from social media. »

2 thoughts on “Psychic? Anthony Quinetta” I went to Australia to free the 4 souls in my doll. Still uses Autistic child to promote story and said book. Psychic child Predator.”