According to WBTW news channel 13,A&E paranormal states Ryan Daniel Buel,is being held on retainer for possible extradition back to pensylvania. Just earlier today as the news broke first ground,this story has unfolded in it’s specific details regarding the once popular entertainment star.

WBTW was quoted as writing.

LORENCE, SC (WBTW) – On Sunday a man known as a celebrity ghost hunter on TV was arrested in Florence and charged with two felonies and a misdemeanor.

Booking records from the Florence County Detention Center show that 34-year-old Ryan Buell was taken into custody on Sept. 18 by Florence deputies.

Under the charges online, he is listed as a “detainer” but documents from a magistrate in Centre County, Pennsylvania say he is accused of theft of leased property, receiving stolen property, and theft of services. Records from Florence County show Buell has a Sumter, South Carolina address.

Buell is a paranormal investigator, author and producer who founded the Paranormal Research Society when he was a student at Pennsylvania State University. According to his Twitter account, Buell is the host of the A&E show Paranormal State.

In the last years, fans have complained about Buell cancelling events and failing to return their money. His mother posted an emotional status on Facebook asking fans  to stop “enabling her son” on Tuesday. 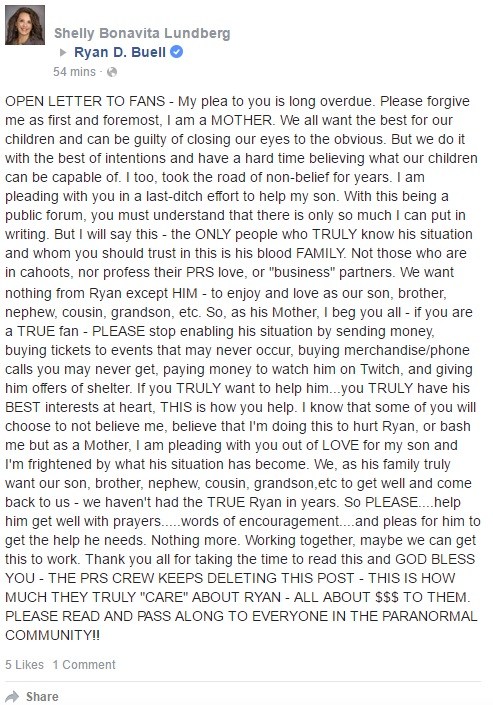 Ryan Daniel Buel’s fan club or also called PRS,has been doing serious damage control,but do not seem to be able to keep the comments from popping back up,from what looked to be prior  fans,who say,they had been cheated out of refunds by the reality star.

One such post is here of PRS doing damage control, telling his fans to not believe any of the news agencies involved in the breaking news of Buels recent arrest.

In the screen shot it states, “please be  wary of the articles being currently run by news media. The truth will come out upon M.R Buel’s release.His team is getting to the bottom of the story and that they assure you this story has a foundation in a misunderstanding.They also went on to state that open news media has very little knowledge of the current arrest situation.

What they(PRS) are not telling folks, is that Dianne Wilson first broke the Buel saga and story some time ago.

As I got involved into the paranormal entertainment world, I realized, that there were scammers just waiting to scam people from innocent unsuspecting people. This sickened my stomach, so I began writing about them to expose them so others would not be cheated and so The paranormal Herald came to force.
View all posts by Paranormal Herald Magazine »
« Ryan Buel the devil in South Carolina,was arrested on 09/18/2016
Former business associate Chad Calek comes forward about Ryan Daniel Buell accuses Buell of being a drug addict. »

One thought on “Don’t trust the man behind the curtain. PRS doing damage control.”