Disclaimer: all allegations made on this e-paper are alleged and assumed to be what is the truth,based on said forwarded information and suggested evidence.The Paranormal Herald can not be held accountable for the printing of said information.

In the past three days the Paranormal world was awakened to  major issues inside the paranormal community.It was not about spooks,ghosts and things that may creep into the night.No their is no paranormal activity happening here, just rumors, gossip and basically two women making the biggest asses of them selves seen inside the normally friendly social community, called the Paranormal.

I had made a posted respectful suggestion to their You tube live stream,but no comment

Evan Jensen 15 hours ago
over the past two days I and 4 others have received death threats and continued inbox messages i have been attacked, my co host has been and a friend as well.There is word saying you are behind it, but wanted to come to you to see if you had any ideas who would be trying to pin folks against each other?, for what ever reasons we are trying to find out if you had something to do with it or not. i’m Evan Jensen I was here during this video. I have no relation with Karissa other then she did a few shows with me. I have no relation to the Horsefly case or the Demons in Seattle case and if. I will be asking all drama from all sides stop, if i’m involved and I was by you even saying my name it brings a lot of unwanted attention and trust me folks I am the best when it comes to taking on scrutiny diversity. I will be telling karissa to back off and expect the same thing in return. thanks. I was hoping you all would share and as they say move forward.

The video was titled”

Femeforce is Producing Serious Paranormal Drama,They have used Said Author Phil Siracusa Over an Alleged Movie And Or Book deal,apparently the said author dismissed the two women for as was stated they were conspiring to make profits from their haunted experiences with the author himself.Phil siracusa found out that the two women were planning on making a book deal,but as allegations later suggested the author had no idea they were doing so and by recent screenshots that were seen on social media,they were terminated with prejudice for their so called spineless deeds.

The paranormal Herald interviewed Karissa Fleck,as allegations surfaced and folks had messaged the Herald to see if a total break down of the entire situation could be found,this is what Karissa Fleck had to say.

“Cindie, Kat and others who were involved in their you-tube gang came into the Horsefly Chronicles case, they promised author Philip Siracusa a movie deal as long as he got rid of the investigators that were on the case previously.

“They Femeforce went as far as having a fake movie director call Phil and pretend to be interested in making a movie. Phil told me I would just have to step back from this certain project, but he knew of Cindies drama and declined being involved with the case as long as Cindie was working it.

“Once I backed out of the case Cindie started harassing me on fake Twitter accounts ten a day. After those attacks David Childer’s started getting anonymous texts from a fake profile, after that Karissa’s friend world renown psychic Jackie Barrett started getting them.

“The messages would be attacking myself and Jackie. Phil found out that behind his back Cindie and Kat were planning on writing a book behind his back with out informing him or offering him any profits off of it.

“Phil fired them from the case and that is when I myself started getting death threats. Cindie and Kat took it upon themselves to do live streams talking shit on Karissa Phil and horsefly on live stream saying the case was fake here are some screen shots from author Phil Siracusa

A few days ago these two women did a YouTube channel live stream, the article was titled”addressing drama”.how ever they surely created more drama then was expected.

Since the two young ladies went public and decided trashing folks was a nice thing to do. just to many individuals have came forward.Posts on social media today have went viral and people are now sharing their stories and reporting how the Femeforce twins have attacked and belittled them as well.

Some of the comments have been included from several other Paranormal respected individuals and groups.They are as follows.These comments were seen inside the paranormal group “Creepy Dolls a group,that does not bother anyone or even allow any said drama.

“Sherrie Schoon Whooo Hooo, its about time Karma caught up with this Nasty despicable person,lol!!! Give it to her good Evan Jensen!!!! She is so destructive in every meaning of the word towards people, it will be a delight to see it head back her way for a change! She should be booted off the internet she is such a psycho path!

Kathy Jacobsen YAY I didnt even know she was still trying to spew her poison lies anymore. I do know she was saying she had ms last year. I now know she doesnt have it at all. It was a boo hoo poor me I want attention thing. I didnt find that amusing as my sister has had ms for about 10 years now and I know all the simptoms and tests for it lol.

Sherrie Schoon Yep ruining anyone’s lives that she can! well I would not let her here and went face to face with this bitch! and that is why she has talked about Creepy dolls in most of her Dumb ass complaining long boar fest video’s! She told lie after lie about everyone and anyone she could and it seems she has made LOTS of enemies along the way! no one want to have anything to do with this psycho as she is bad for your health and blood pressure,lol!!!

Sherrie Schoon Xander Angel Evevannya, she has around 20 Negative destructive video’s or more about us and everyone she dose not like ,lol! she is a very very destructive person and bullies everyone in her video of telling nothing but lies! I have kicked her outof my group when I started to see it and every group I admin in! I and my group have tried to help people who got entangled with her and she tried to destroy, and we tried to pick up the pieces and help them. I blow off her BS as she is nothing but a total lair! But some people get so over whelmed and hurt they cant cope and dont know what to do except to get depressed and very anger! This lady is nothing, but a lair and bully and I wont give her the power or her BS as it is all make belief,lol! i tell people she is a nothing and means nothing unless you let her. but anyway she has cause a LOT of people grief and destruction to many of my friends! and yea she has said so many things about me and my admins and group, but we dont care as she means nothing to us as she is a Loser and Moron and why should we give her the time of day for her usely mind,lol! but anyway

Xander Angel Evevannya, you wanted to know what she has done then you should check out her awful lying videos of her tearing people to shreds, but i will tell you this, NONE OF IT IS TRUE! It is the Raving of a Jealous lonely old hag sad to say!

The Paranormal Herald has had their entire line busy intercepting screenshots,threats, allegations and  has been trying to follow how all this is being broken down on social media and even some serious threats sent via cell phone, as well as faked application numbers.

Some folks in a circle of like 5, have been randomly targeted through their cell phones through group chat and messenger. This is where the messages have been coming from?The 215 number is from a faked phone application. 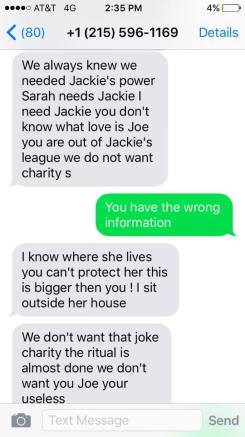 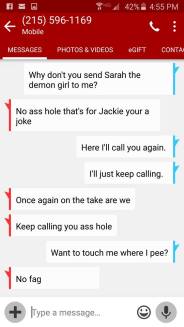 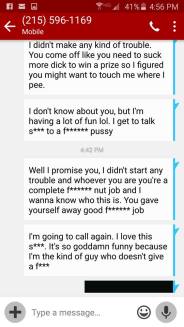 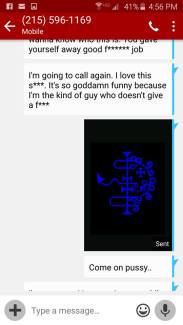 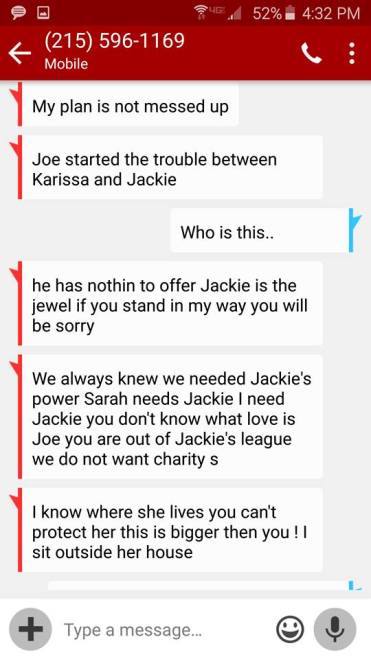 It is 4:40 pm Pacific time and the threatening texts are still filtering in,but that is what you get when you mix  Black Magic with some crazy ass people. 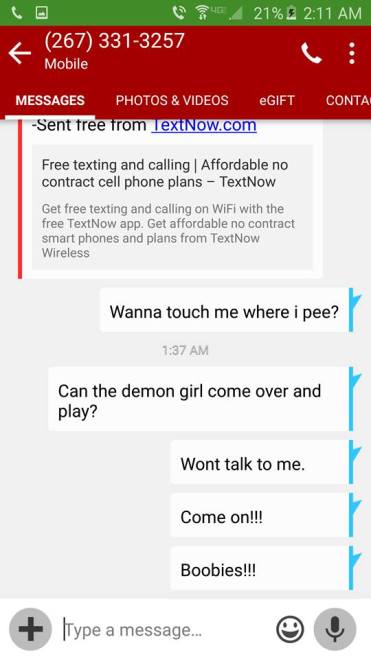 MY NAME IS EVAN JENSEN A PARANORMAL EXPERT IF THERE IS SUCH A THING. I myself being involved at various aspects of the paranormal have come to realize it is a field riddled with conmen and frauds hoping to evade the public and con as many as possible. This paper I.E blog site has stopped many from doing such. It is a free site for those needing help and wishing to spread the news of there fellow con people.
View all posts by BEYOND THE EDGE OF REALITY »
« Rob Hood is a paranormal investigator from the research group Truthseekers Paranormal Research and Investigations,Says he faked evidence to be on TV.
Norene Balovich launches urgent plea to please leave her alone,message is to Femme Force,Paranormal Herald interviews Norene »