Throughout the years,there has been numerous haunted books written,ghost stories and stories what they say are true hauntings. The Beckers have a story, that shocked the nation.Their story is one that was told first in Chicago on NBC in 1971.

In the 1970s when it was still very much taboo to talk about ghosts one families story of living in a haunted house in the inner city of Chicago, Illinois was aired on NBC news.

A news reporter Carole Simpson interviewed a young family named Becker who claimed that the house they lived in was haunted by several ghosts.

Simpson’s interview was televised in the Becker’s living room and was the first exorcism to be broadcast live. This exorcism was performed by a medium, Joseph DeLouise who had been one of only a handful who had responded to the Becker’s pleas for help and the Rev. William Deri-Davies.

The Beckers have made 2, of what definitely appears to be the best books written in the paranormal field.

From The Author:Edwin F Becker. 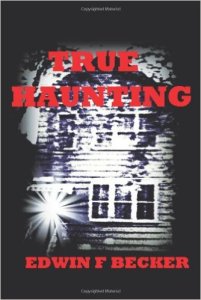 True haunting. It was the first ever filmed and televised by NBC in 1971. A young couple purchases a building that was built and occupied by a single family that refused to relinquish their hold, even after death. Investigated and verified by experts, this residence brought chaos to the lives of those who chose to reside there. Unlike a horror novel, this chronicles what a real ghostly experience would resemble. Long before the laws of disclosure, a young couple winds up in the midst of strange occurrences prior to the term ‘paranormal’ becoming a common description. Searching for help at time when supernatural events were a taboo subject and being ignored by the Church, sent them into a desperate search for any assistance. Only a little known organization came to their aid. Author Tom Valentine, brought in a nationally known psychic, Joseph DeLouise, who then asked assistance of an exorcist from England, Reverend William Derl-Davis. Together, they gave their best effort at exorcising the multiple spirits inhabiting the building and disrupting the lives of the living. Events were filmed by NBC, who sent their most prominent Chicago journalist, Carole Simpson, to cover the event. Follow a young couple with a newborn as they attempt to cope with inexplicable events, experience denial, plead for help from their Church, and step into the world of the paranormal. Understand why ghosts cannot be exorcised and a true example of their strong sense of domain, even after death. Learn what experts and gifted people did in a failed attempt to assist this desperate couple. There is no happy ending, as the young couple suffers emotionally, are physically threatened, have their pets terrorized, and eventually suffer financially by actually “giving” their building away. What was intended as a financial answer to their prayers became, instead, a curse to be abolished. Learn many of the various manifestations that can be common in haunting. Ghosts can be seen and heard. They can propel objects and interrupt utilities. They can affect your moods and feed off of your emotions. They can appear as solid as you and me. They can react and become hostile if threatened or violated. Most important, as this young couple learned, they can harm you and cannot be removed. This is a firsthand accounting of what a true haunting is like. There are certain subtle occurrences you may find the most frightening, because you just might relate and recognize them. If so, guess what? You may have a ghost! 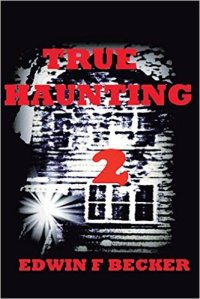 True Haunting 2, is told from the eyes and voice of Edwin Becker’s wife Marsha Becker.

A companion story to the original True Haunting. True Haunting 2 is from the voices and experiences of Marsha, the stay-at-home wife, and Dan, one of the longer-term tenants from the first floor apartment and includes material left out of the first book. A factual account written by a best-selling author, featuring the birth of televised paranormal! This is the story of a true haunting. It was the first ever televised paranormal event by NBC in 1971. A young couple purchases a building that was built and occupied by a single family that refused to relinquish their hold, even after death. Investigated and verified by experts, this residence brought chaos to the lives of those who chose to reside there. Unlike a horror novel, this chronicles what a real ghostly experience truly is. Long before the laws of disclosure, a young couple winds up in the midst of strange occurrences, and survives. True Haunting was a 40+ year project, starting from the time we moved out. The book broke all sorts of records and even launched itself into television. The paranormal was not something people discussed back in the 70’s, and it certainly didn’t have the acceptance and toleration people have for it today. But, about twenty-five years later, society was a slightly more accepting. Now, the writing will not stop. Thousands of emails have poured in asking about Marsha’s story; and, we’re happy to say that after publishing True Haunting, the “Dave” in the book–actual name: Dan White–contacted me 40 years later and we have since rekindled a lost relationship that was once hindered by business and the darkness that was encompassed within the house. Thus, True Haunting 2 was born!

MY NAME IS EVAN JENSEN A PARANORMAL EXPERT IF THERE IS SUCH A THING. I myself being involved at various aspects of the paranormal have come to realize it is a field riddled with conmen and frauds hoping to evade the public and con as many as possible. This paper I.E blog site has stopped many from doing such. It is a free site for those needing help and wishing to spread the news of there fellow con people.
View all posts by BEYOND THE EDGE OF REALITY »
« Sasha Klanott,represented Resurection Talent,even when their was money missing two weeks ago.Runs bullying site as a forfront
Debby Constantino talks to Medium Mable Jordan after her Death ? Doubtful. »