Posted by BEYOND THE EDGE OF REALITY ⋅ September 7, 2015
Filed Under  Mothman, Paranormal, point pleasant

On Dec. 15, 1967, the Silver Bridge connecting Point Pleasant to Gallipolis, Ohio, collapsed, submerging 75 vehicles and killing 46 people.Since then and eerie legend was created,known as the Mothman.Some say he is a Oman, a messenger, bringing harsh news and dedicating himself as something foretold bad to happen.

The creature is believed to be able to predict upcoming events that have the potential to impact human life. The Mothman Prophecies, written by parapsychologist author John Keel in 1975, painstakingly describes the events that lead to the collapse of the Silver Bridge. The story was later brought to the big screen by director Mark Pellington and starring Richard Gere on a film with the book’s name.

The weird events connected to the Mothman began on November 12, 1966 near Clendenin, West Virginia. Five men were in the local cemetery that day, preparing a grave for a burial, when something that looked like a “brown human being” lifted off from some nearby trees and flew over their heads. The men were baffled. It did not appear to be a bird, but more like a man with wings. A few days later, more sightings would take place, electrifying the entire region.

And stranger things still took place….. A reporter named Mary Hyre, who was the Point Pleasant correspondent for the Athens, Ohio newspaper the Messenger, also wrote extensively about the local sightings. In fact, after one very active weekend, she was deluged with over 500 phone calls from people who saw strange lights in the skies. One night in January 1967, she was working late in her office in the county courthouse and a man walked in the door. He was very short and had strange eyes that were covered with thick glasses. He also had long, black hair that was cut squarely “like a bowl haircut”. Hyre said that he spoke in a low, halting voice and he asked for directions to Welsh, West Virginia. She thought that he had some sort of speech impediment and for some reason, he terrified her. “He kept getting closer and closer to me, “ she said, “ and his funny eyes were staring at me almost hypnotically.” 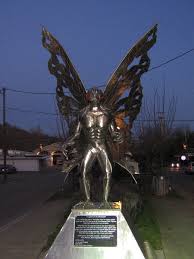 Their were two dead bodies, that were recovered inside that vehicle.

File photo: This photo, taken on the Ohio side of the Silver Bridge, shows cars and trucks among the wreckage. – 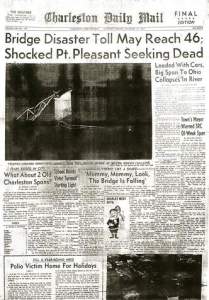 One survives, W.Va. – Ben Cedar, shares his story of that disastrous day in 1967.”He crossed the Silver Bridge for the final time just before 5 p.m. on Dec. 15, 1967, headed for Gallipolis, Ohio. Once there he stopped at a Kroger store and used a payphone to call his office, just to check in.As he was in the store, he overheard other customers talking about a bridge collapse.Ben often spoke of the way that bridge felt to him and openly stated, if you were caught in the middle, it would sway back and forth and he felt uneasy about it.He (Ben)-said nearly every single time he crossed the bridge.

Mind you folks,this was the year I (EvanJensen) was born 1966.

othman in the U.K

MY NAME IS EVAN JENSEN A PARANORMAL EXPERT IF THERE IS SUCH A THING. I myself being involved at various aspects of the paranormal have come to realize it is a field riddled with conmen and frauds hoping to evade the public and con as many as possible. This paper I.E blog site has stopped many from doing such. It is a free site for those needing help and wishing to spread the news of there fellow con people.
View all posts by BEYOND THE EDGE OF REALITY »
« ‘Weird things’ at the Guilford Sheriff’s Office could be Otto, the ghost
Next Post »