Zak Bagan visited the Oman house,what he say’s he found was disturbing to him.It truly seemed like what he(Zak) wrote,was equally disturbing to his fans, readers and supporters.

Zak Bagans apparently, while being a guest at his (David Oman’s) house had placed a  3 x 2 x 1 inch hole in his theater room.There is one thing we all know, is that Zak does not respect the dead, nor the living

Inside the book Zak Bagan’s authored, he wrote the following comments.

“The whole time they were looking for spirits in nooks and crannies,the spirit may have been found in the person that actually lives there. Many spirits just want their physical bodies back. After all they smoke a ciggarette, eat a pancake,lay out by the pool, and feel the wind on their face or a touch by a loved one

“The David Oman house In California is another prime example of a person,not the house being haunted.David lives in a house, even the most respected and intelligent and respected paranormal experts fear to enter. 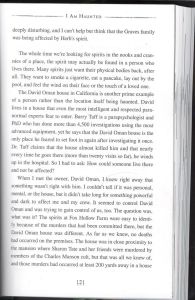 The Paranormal Herald had found out Zak Bagans was making ridiculous unsubstantiated statements against a super good guy inside the paranormal field. David Oman, so wanted to set the record straight concerning David Oman.After interviewing M.R Oman some time ago, on my network show “Beyond The Edge Of Reality,we found David Oman to be a great speaker,entrusted paranormal friend and found no irregularities, that would, could or ever hint to the fact David Oman is haunted.

MY NAME IS EVAN JENSEN A PARANORMAL EXPERT IF THERE IS SUCH A THING. I myself being involved at various aspects of the paranormal have come to realize it is a field riddled with conmen and frauds hoping to evade the public and con as many as possible. This paper I.E blog site has stopped many from doing such. It is a free site for those needing help and wishing to spread the news of there fellow con people.
View all posts by BEYOND THE EDGE OF REALITY »
« EPA now trying to swindle Native Americans out of compensation after polluting their land with toxic waste, this is why their are Native American curses and the like..
Engineer talks to dead teenage daughter, developed Paranormal detection devices. »