There are some recent claims from the Baltic Sea of a new find. Remains from a  prior sunken ship was found. In fact the stories have been trending all over social media. The social claims are that the ship was just 500 years old and was rumored to be a prior war ship.

“The ship comes from a time just when Columbus was sailing across the ocean and Vasco da Gama also went to India,” Sandekjer said. 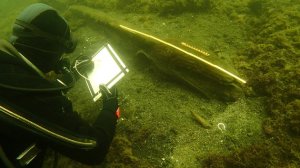 The ship was anchored in Ronneby when it sunk in 1495 after a fire. A contemporary of Christopher Columbus’ flagship Santa Maria, the wreck is considered to be the best-preserved example of a 15th-century ship.

One thing disturbing is that the Huffington posts is seemingly calling this ship a sea monster? when it is clearly not.

The carved wooden artifact is about 3.5 meters long and weighs about 300 kilograms, according to a written statement issued by the university. It depicts an animal with ears like a lion’s and a crocodile-like mouth–and it appears to be gobbling up or spitting out a person.

It’s not the sort of thing you come across every day. Well we do agree with this.

“No similar item from the 15th Century has ever been found anywhere in the world,” Marcus Sandekjer, head of the Blekinge Museum in Karlskrona, Sweden, told Discovery News. The museum was involved in the salvage effort, along with the university.

The figurehead belonged to the Gribshunden, a Danish vessel that sank in 1495 after catching fire, according to the university’s statement. The flagship of King Hans, the vessel now lies on the bottom of the sea at a depth of about 10 meters along Sweden’s southeastern coast, not far from the town of Ronneby.

link where the story may have originated from initially. http://www.huffingtonpost.com/entry/scary-sea-monster-recovered-from-centuries-old-shipwreck_55cccb5ae4b064d5910abf8b?kvcommref=mostpopular&section=weird-news&ncid=fcbklnkushpmg00000022

MY NAME IS EVAN JENSEN A PARANORMAL EXPERT IF THERE IS SUCH A THING. I myself being involved at various aspects of the paranormal have come to realize it is a field riddled with conmen and frauds hoping to evade the public and con as many as possible. This paper I.E blog site has stopped many from doing such. It is a free site for those needing help and wishing to spread the news of there fellow con people.
View all posts by BEYOND THE EDGE OF REALITY »
« Anne Strieber Has Died,author and obituary, prayers to her.
Pennsylvanian man says he captured photo image of Bigfoot.another blurry picture. »

One thought on “Strange ‘Sea Monster’ Recovered From Centuries-Old Shipwreck”