Posted by BEYOND THE EDGE OF REALITY ⋅ August 12, 2015
Filed Under  Bigffot news, Bigfoot

The Oregonian reported first a live coverage story about a  man and a claim, that I thought  for sure may have been  from some comedy hour, in some sleazy night club.They often say stories are just reproduced, from one  to another. This is One story I have never heard of before?

The title should of course be a tell tell sign of things to come here.Naked man,Bifoot,police called, yah your getting the idea now.

Jeff McDonald had gone out hunting for deer near his home in Manning (pictured), Oregon, when he saw Linus Norgren wearing what appeared to be ‘tan clothing’

a normal response before Norgren said that he was ‘a Sasquatch from a family of Sasquatches’.

After offering to help take him home, Norgren struck Mr McDonald on the head with a rock, causing him to black out.

When he woke up, Oregon Live reports, Norgren was on top of him and squeezing his hands tightly around his neck while Mr McDonald had suffered two dislocated shoulders.

As the struggle unfolded he asked his attacker why he was trying to kill him to which Norgren replied: ‘Sasquatch kills the hunter’.

Mr McDonald said he managed to bite one of Mr Norgren’s knuckles before the attacker appeared to ‘pass out’ on top of him. After a further struggle he managed to free himself and reach his gun, according to reports.

Pointing his rifle at Norgren, he called 911.

According to KPTV, McDonald told authorities they needed to get there quick, ‘because I only have one option here and you know what it is’.

Deputies eventually found them in thick forest after a 90 minute search.

McDonald had held Norgren at gunpoint the whole time.

Jailed: Linus Norgren, 22, was sentenced to 10 years in prison Tuesday for attacking a hunter while naked in woods in Manning, Oregon, in October 2013 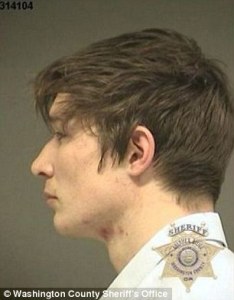 Mentally disturbed: Linus Norgren (pictured) attacked Jeff McDonald in the woods near Manning, Oregon, claiming he was from a family of Sasquatch

Claims he had came from a family of Sasquatch?

In court this week, Norgren said he was suffering ‘catastrophic mental disturbances’ at the time.

Jurors were told that he had experiences symptoms of his ‘untreated bipolar disorder’, Oregon Live reports, while Norgren also told the court that he was acting in self-defense.

‘I was injured already, I was naked and I was terrified,’ Norgren said in court Tuesday, KPTV reported.

‘Not to make excuses for myself, but Mr. McDonald’s presence was absolutely terrifying.

‘I truly believed I needed to defend myself to get out of that situation and go home.

But the self defence argument was rejected by jurors and Norgren was convicted of attempted murder and three counts of second-degree assault.

He was cleared of further charges of first degree assault and unlawful use of a weapon.

Oregon Live reports that his defense lawyer said he was unable to use an ‘insanity defense’ without Norgren’s consent but suggested the evidence of mental illness should be a ‘mitigating factor’.

Norgren was jailed for ten years at Washington County Circuit Court this week, a year and a half after the incident in October 2013.

MY NAME IS EVAN JENSEN A PARANORMAL EXPERT IF THERE IS SUCH A THING. I myself being involved at various aspects of the paranormal have come to realize it is a field riddled with conmen and frauds hoping to evade the public and con as many as possible. This paper I.E blog site has stopped many from doing such. It is a free site for those needing help and wishing to spread the news of there fellow con people.
View all posts by BEYOND THE EDGE OF REALITY »
« Ryan Daniel Buel’s ex employee gets hammered by author Kirby Robinson, in “Eye Of the Paranormal” blog
Trouble Shooter Ryan Daniel Buels long time friend psychic Chip Cofee speaks out »