What is the Bermuda Triangle?

Through out the years, we have heard about missing plains and boats, that had suddenly disappeared, never to be seen again. What seems to be the long unanswered mystery is where did they go?

The area referred to as the Bermuda Triangle, or Devil’s Triangle, covers about 500,000 square miles of ocean off the southeastern tip of Florida.The term “Bermuda Triangle” was first used in an article written by Vincent H. Gaddis for Argosy magazine in 1964. Gaddis claimed that several ships and planes had disappeared without explanation in that area. The article was expanded and included in his book, Invisible Horizons: True Mysteries of the Sea (1965), where he described nine mysterious incidents and provided extensive detail. Many newspapers carried a story in December of 1967 about strange incidents in the Bermuda Triangle after a National Geographic Society news release brought attention to Gaddis’s book. The triangle was featured in a cover story in Argosy in 1968, in a book called Limbo of the Lost (1969) by John Wallace Spencer, and in a documentary film, The Devil’s Triangle, in 1971. Charles Berlitz’s 1974 bestseller The Bermuda Triangle marked the height of the disaster area legend, but some of its sensationalized claims were quickly proved inaccurate.

As early as 1952, George X. Sands had noted in a report in Fate magazine that an unusually large number of strange accidents had occurred in the region associated with the Bermuda Triangle. That many of the accidents in the area are intriguing, and that the area does have some natural conditions that sailors and pilots need to be aware of, has not been challenged. However, neither statistics nor documented evidence indicates that the number of accidents is unusually high or without explanation.

Few of those stories included telling details. All of the crewmen of Flight 19 were in training, for example, except for their patrol leader, who had tried to withdraw from his flight duty that day because he was feeling ill. After his compass malfunctioned soon into the flight, the flight leader decided to navigate by land-marks below on the islands of the Florida Keys, with which he was familiar. Visibility became a problem because of a sudden storm, and the leader became disoriented. Flight 19 was still in radio contact with the Fort Lauderdale air base, but after some mechanical difficulties they failed to switch to an emergency frequency. Radio recordings indicate that some of the crew believed they were heading out over the Atlantic Ocean, instead of the Gulf of Mexico as their leader reported.

A search plane took off and was claimed to have disappeared into the Bermuda Triangle with Flight 19. The plane actually blew up 23 seconds after takeoff. Wreckage from Flight 19 has never been recovered.

Other aircraft that have disappeared in the area include a DC-3 carrying 27 passengers in 1948 and a C-124 Globemaster with 53 passengers in 1951. Among the ships often listed among the mysteriously disappeared are the Mary Celeste (1872), the Marine tankership Sulphur Queen with 39 men aboard (1963), and the nuclear-powered submarine Scorpion with a crew of 99 (1968). The Mary Celeste entered the list of supposed Bermuda Triangle mysteries many decades after its odd tragedy. The ship set sail from New Yorkto Genoa, Italy, but was found sailing unmanned some 400 miles off course, off the coast of Africa. Personal articles of the crew were found and food storage areas showed no sign of upheaval. A tattered sail and a missing lifeboat suggested the boat had encountered a storm, but the ship’s log, in which information was recorded as late as nine days before the ship was found, made no mention of any kind of catastrophe.

There is no evidence, however, that the Mary Celeste ever entered the area of the Bermuda Triangle. Still, the eerie, unanswered questions concerning its fate are often cited by those who attribute a malevolent force as being responsible for odd and tragic events of the triangle.

Nevertheless, there are many documented disappearances that occurred within the triangle. They include a four-engine Tudor IV air-plane lost in 1948, with 31 aboard; an American freighter, the SS Sandra (1952), which sunk without a trace; a British York transport plane, disappeared in 1952, with 33 aboard; a U.S. Navy Lockheed Constellation airplane, vanished in 1954 with 42 aboard; a U.S. Navy seaplane, 1956, with a crew of 10; a French freighter in 1970; and a German freighter, Anita, lost in 1972 with a crew of 32.

Theories about why so many air and water ships disappeared in the Bermuda Triangle involve strange magnetic fields, time warps, the lost continent of Atlantis, and alien abduction. Other proposed explanations include physical forces unknown to science, a “hole in the sky,” and an unusual chemical component in the region’s seawater. Several books have suggested that an intelligent, technologically advanced race living in space or under the sea has been responsible for jamming equipment and leading ships and planes to disaster.

Many books and articles play up mystery angles concerning vanished ships by depicting the disappearances as having occurred in calm weather and daylight. Such particulars of Flight 19 as an inexperienced crew, a faulty compass, a squadron leader who failed to follow instructions, and conditions of deteriorating weather and visibility are often not mentioned. Larry Kusche, a librarian at Arizona State University, examined claims of mysterious disappearances and recorded evidence from each example. The results, published in The Bermuda Triangle—Mystery Solved, showed that many of the accidents happened during raging storms, or were later explained.

The area known as the Bermuda Triangle is one of the two places on Earth where a magnetic compass does point towards true north, a phenomenon called compass variation. Navigators must compensate the amount of variation or the craft they are on will go off course. A region commonly called the “Devil’s Sea” in thePacific Ocean is the other area of compass variation.

The Gulf Stream that runs through the Bermuda Triangle area is swift and turbulent, and can quickly erase evidence of a disaster. The unpredictable Caribbean-Atlantic weather can suddenly change into thunderstorms or create waterspouts. Many short and intense storms build up quickly and dissipate quickly, undetected by satellite surveillance. The ocean floor has shoals around islands as well as some of the deepest marine trenches in the world. The interaction of the strong currents over reefs promotes a constant flux and the development of new, uncharted navigational hazards.

These factors can confuse even experienced sailors. A large number of pleasure boats travel the waters between Florida’s coast and the Bahamas. The U.S. Coast Guard receives more than 8,000 distress calls per year, averaging more than 20 per day from that area, often from sailors who have run out of gas.

Could it be that the Bermuda Triangle, was yet again another media sensation? a hype, that spread around the world?

After gaining widespread fame as the first person to sail solo around the globe, Joshua Slocum disappeared on a 1909 voyage from Martha’s Vineyard to South America. Though it’s unclear exactly what happened, many sources later attributed his death to the Bermuda Triangle.

A great video and a better understanding of the Bermuda Triangle can be seen from this link.

The Bermuda triangle has been a surrounding legend, that has fascinated me since I remembered being able to read.

What is the Bermuda Triangle? 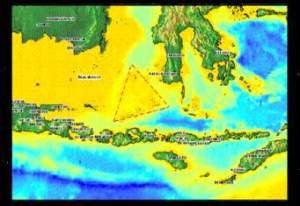 Some speculate that unknown and mysterious forces account for the unexplained disappearances, such as extraterrestrials capturing humans for study; the influence of the lost continent of Atlantis; vortexes that suck objects into other dimensions; and other whimsical ideas.  Some explanations are more grounded in science, if not in evidence.  These include oceanic flatulence (methane gas erupting from ocean sediments) and disruptions in geomagnetic lines of flux.

There are of course other theories, such as  the Gulf Stream can cause rapid, sometimes violent, changes in weather.  Additionally, the large number of islands in the Caribbean Sea creates many areas of shallow water that can be treacherous to ship navigation. And there is some evidence to suggest that the Bermuda Triangle is a place where a “magnetic” compass sometimes points towards “true” north, as opposed to “magnetic” north.

Others suggest sudden rogue tidal waves. Or maybe some mysterious geomagnetic anomaly that creates navigational problems confusing pilots and somehow causing them to plunge into the ocean; then again, pilots are trained to fly even with a loss of electronic navigation, and that theory doesn’t explain ship disappearances. In fact, the Navy has a web page

debunking this idea: “It has been inaccurately claimed that the Bermuda Triangle is one of the two places on earth at which a magnetic compass points towards true north. Normally a compass will point toward magnetic north. The difference between the two is known as compass variation. … Although in the past this compass variation did affect the Bermuda Triangle region, due to fluctuations in the Earth’s magnetic field this has apparently not been the case since the nineteenth cent

There is one sure thing  I wished to state for the record, I have found live sciences information to be just pure belief and skepticism, to me this is not science but a skeptics way of revolving information, they can not explain with science, after all who teaches science modern day man does. It does not mean because their is no scientific evidence it does not exist.

Modern day science stated this “Despite the fact that the Bermuda Triangle has been definitively debunked for decades, it still appears as an “unsolved mystery” in new books — mostly by authors more interested in a sensational story than the facts. In the end, there’s no need to invoke time portals, Atlantis,submerged UFO bases, geomagnetic anomalies, tidal waves, or anything else. The Bermuda Triangle mystery has a much simpler explanation: sloppy research and sensational, mystery-mongering books.

With all do respect I completely disagree with what was p-posted and said in live sciences writings. If the Bermuda triangle was solved, the legend and mystery, then why has it been a forever unending challenge to solve the mystery of the triangle?, can live science explain the disappearances or the loss of many missing persons? if not until that day comes, we must keep and opened mind to this incredible legend.

MY NAME IS EVAN JENSEN A PARANORMAL EXPERT IF THERE IS SUCH A THING. I myself being involved at various aspects of the paranormal have come to realize it is a field riddled with conmen and frauds hoping to evade the public and con as many as possible. This paper I.E blog site has stopped many from doing such. It is a free site for those needing help and wishing to spread the news of there fellow con people.
View all posts by BEYOND THE EDGE OF REALITY »
« SHIP REAPPEARS 90 YEARS AFTER GOING MISSING,what is inside the Bermuda Triangle.
Witchcraft America’s most bizarre unsolved murder mystery »